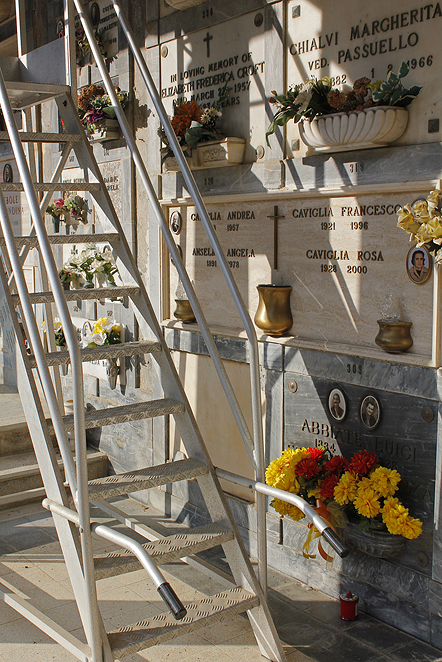 From: £22.00
Photographic print. Staircase and gold flowers at a wall of Niche plaques in the stone arcade at Alassio Cemetery, Italy.
Alassio Cimitero is in close proximity to Villa della Pergola at Via Privata Montagu 9/1 on the coast of Liguria. I read in a Telegraph Travel article published on July 20 2010: 'Once this hillside estate, with its twin villas and acres of landscaped terraces, was one of the pearls of the British Italian Riviera - a carefree world of winter expatriate colonies between Bordighera and Rapallo that reached its high-water mark between the two world wars, and disappeared almost overnight in 1939. Built by the Scottish war hero General Sir Montagu McMurdo in the 1870s, the villa and its annexe, Villino della Pergola, have been sensitively restored and turned into a charming 12-room luxury guesthouse that breathes the Eden-on-the-Riviera spirit of British Alassio's heyday, with the addition of a little modern style, verve and comfort.'
Colours are as accurate as possible but may differ slightly due to screen calibrations.
Shipping outside UK mainland is estimated, on occasion a variation will be emailed before dispatch.
Images printed at a Fuji approved professional laboratory on highest quality archive papers, Fuji Crystal or DP 2.
A Signed Certificate of Authenticity Card states the series number.