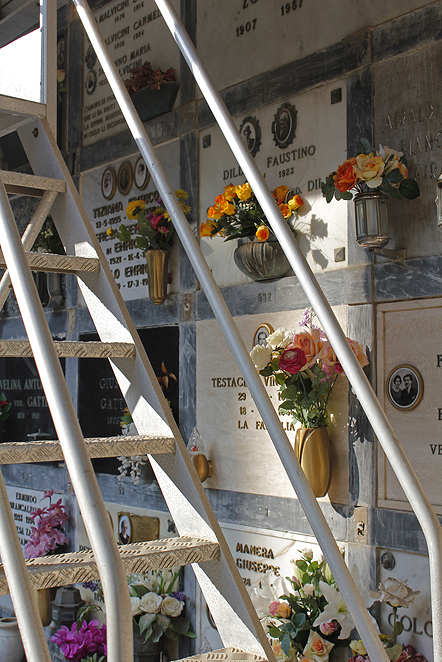 From: £22.00
Photographic print. A staircase, orange and peach Roses at a wall of tomb plaques in Alassio Cemetery, Italy.
At Via Michelangelo, 113 in Savona on the coast of Liguria, I photographed this in the late afternoon light, enhancing the golden colour of the flowers and tombs. Photographing graveyards is a difficult subject matter but I always try to portay them with beauty, peace and respect and never when people are visiting their graves. The English composer Edward Elgar and his wife came for the winter of 1903 where he wrote a concert overture called In the South. In 1923 Daniel Hanbury founded the Hanbury Tennis Club with a historic Club House, opened by the great tennis player Henry Lacoste. Alassio was featured as the location for a holiday in the 1944 film The Children Are Watching and in Alfred Hitchcock's directorial debutin 1925, The Pleasure Garden, a scene was filmed at the beach and in the gardens of Villa della Pergola at Via Privata Montagu 9/1.
Colours are as accurate as possible but may differ slightly due to screen calibrations.
Shipping outside UK mainland is estimated, on occasion a variation will be emailed before dispatch.
Images printed at a Fuji approved professional laboratory on highest quality archive papers, Fuji Crystal or DP 2.
A Signed Certificate of Authenticity Card states the series number.