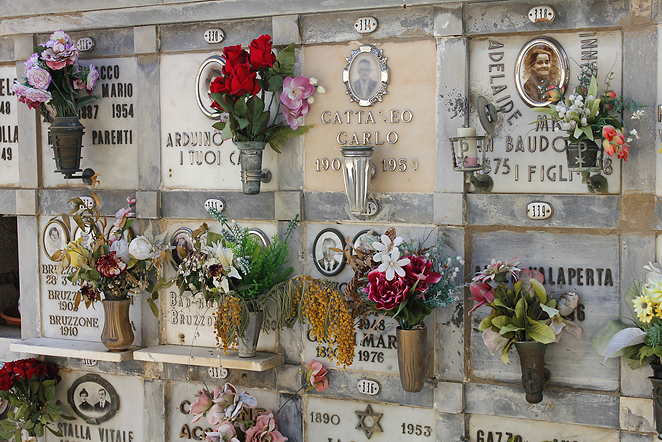 Price: £22.00
Photographic print. Avenue of Niche tombs and flowers at Alassio Cemetery on the Italian Riviera, Italy.
In 1875 two Scottish noblemen, George Henderson Gibb and General William Montagu Scott McMurdo, were the first British people to spend an entire winter in Alassio along with their families. In 1880 the McMurdo family began work on Villa della Pergola including a dome clad in majolica from Albisola, an array of marbles and a fountain near the grand staircase. It had various terraced levels, following the natural contours of the hill and they planted Palms and Cypresses amongst the olive and orange groves. In 1922 it was sold to the Hanbury family who planted species from the Mortola botanical garden, significantly increasing the variety of exotic plants at the Villa. Daniel Hanbury was the chief architect of Alassio as a successful winter health resort. The Hanburys left in 1940 but in 1946 returned to resume work interrupted by the war but Daniel died suddenly in 1948. His wife remained with a smaller town community of 'Anglo-Alassians'.
Colours are as accurate as possible but may differ slightly due to screen calibrations.
Shipping outside UK mainland is estimated, on occasion a variation will be emailed before dispatch.
Images printed at a Fuji approved professional laboratory on highest quality archive papers, Fuji Crystal or DP 2.
A Signed Certificate of Authenticity Card states the series number.