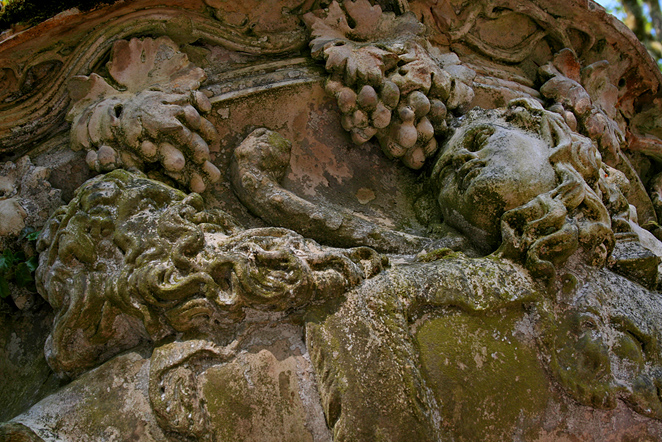 From: £22.00
Photographic Print. Figures on Victorian Coade Stone vase in Portmeirion village.
A lichen covered vase decorated with vines, a woman and a bearded man with dramatic expression in Portmeirion. Lithodipyra is the Ancient Greek meaning stone fired twice, a technique named and created by Eleanor Coade in 1769, when she began Coade's Artificial Stone Manufactory in Lambeth, Coade and Sealy. Neoclassical statues, architectural decorations, embellishments and garden ornaments were produced of the highest quality and were by appointment to George lll and the Prince Regent. They were produced until 1833 and Eleanor's company remained the only really successful manufacturer of Coade Stone but the recipe has now been rediscovered at Coade Ltd where they are reproducing a range of sculpture. The recipe is grog, flint, quartz, soda lime glass and ball clay, kiln fired in molds over a period of days making it highly resilient to weather and pollution so that most statues and carvings still retain their sharpness today, over 200 years later.
Colours are as accurate as possible but may differ slightly due to screen calibrations.
Shipping outside UK mainland is estimated, on occasion a variation will be emailed before dispatch.
Images printed at a Fuji approved professional laboratory on highest quality archive papers, Fuji Crystal or DP 2.
A Signed Certificate of Authenticity Card states the series number.