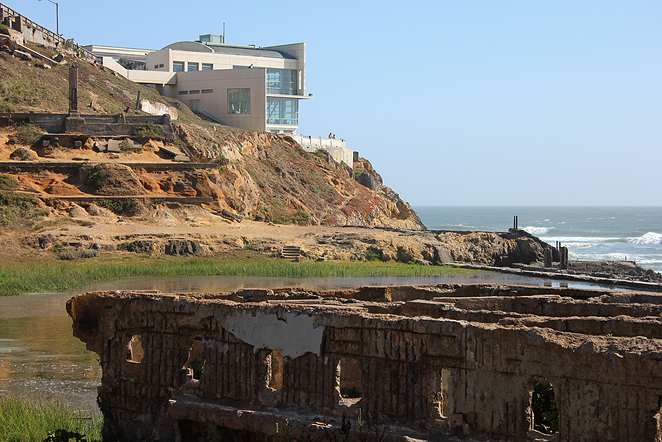 From: £22.00
Photographic Print. Sutro Baths at Point Lobos Avenue at Land's End, Outer Richmond, San Francisco, California.
The site has a magical quality because of it's one time greatness and epic scale but also it seems like an archaeological excavation site, as if not demolished but the ground dug away to reveal an ancient Greek remains, a labyrinth, skeletal foundations and a few crumbling pillars standing defiantly against the sea. Eerie and desolate but also powerful, inviting, uplifting, the remains of staircases, terraces, a tunnel, a cave and low wall structures set against crashing waves make you feel like you are close to the harsh force of nature which defeated it, that you are right against the edge of things. An eccentric entrepreneur called Adolph Sutro opened the Baths in 1896 as the world's largest indoor pleasure palace of 7 swimming pools and entertainments, costing $1 million.
Colours are as accurate as possible but may differ slightly due to screen calibrations.
Shipping outside UK mainland is estimated, on occasion a variation will be emailed before dispatch.
Images printed at a Fuji approved professional laboratory on highest quality archive papers, Fuji Crystal or DP2.
A Signed Certificate of Authenticity Card states the series number.