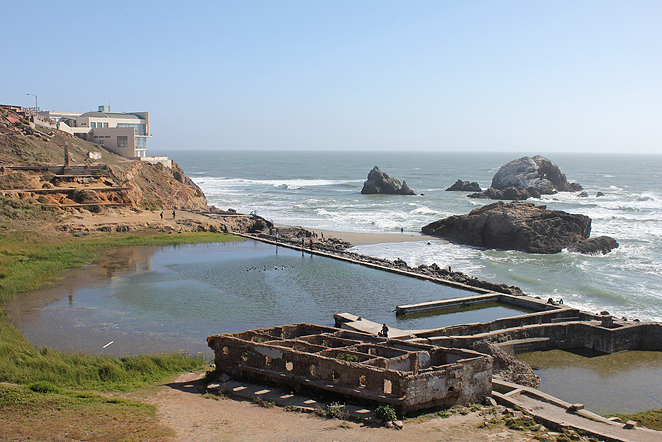 Price: £22.00
Photographic Print. Changing rooms at Sutro Baths, Land's End, Outer Richmond, San Francisco, California.
The swimming pool changing rooms at Sutro Baths have become a giant modern sculpture shaped by time and ersosion. Part of a ruins of epic proportions which still evokes a feeling of something grand, romantic and inspiring. Wandering around, you feel as if you are excavating an ancient site. When it was built in 1896 it had 7 pools of sea water which had gushed in with the tide or had been pumped in from inside the cave. Last time I was there a guide in the shop told me he remembered how impressive it was as a child to walk down the triple wide staircase decorated with Palms, see the 7 pools, museum exhibits and feel the warmth.
Colours are as accurate as possible but may differ slightly due to screen calibrations.Shipping outside UK mainland is estimated, on occasion a variation will be emailed before dispatch.Images printed at a Fuji approved professional laboratory on highest quality archive papers, Fuji Crystal or DP2.A Signed Certificate of Authenticity Card states the series number.