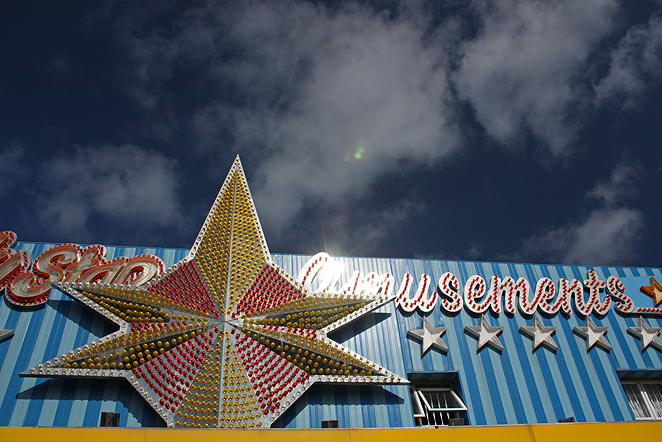 From: £22.00
Photographic Print. Spaceships over Lucky Star Amusement Arcade on the promenade at Blackpool, demolished
This was used as a dramatic moody backdrop in the TV series Blackpool starring David Tennant. Metal edges of the retro signage catch the sunlight, creating shooting sheres of light into the dark atmospheric sky, looking as if space ships are hovering. I cannot believe Blackpool council allowed this classic amusement arcade façade to be destroyed in 2014 to make way for....another Wetherspoons pub when there were already 3 in Blackpool. If it had to be a pub they could have kept the façade, or its Las Vegas style illuminated huge star, signage and stars would have looked cool emblazoned across the bar building. They must know how fashionable and valuable these metal cut out letters are ? Was it not in enough publicity to convince them to keep it, that Lucky Star Amusements facade starred in the award winning BBC hit tv series Blackpool with David Tennant and David Morrisey and in a pop video Candy with Robbie Williams ?? Planners said in a report to the committee, there "is the potential to have a more interesting and imaginative façade, representing the vibrancy of the resort". That describes the façade they had !. In heritage terms, for Blackpool, it was the equivalent of the 'Welcome to Las Vegas' sign. It should have been listed and protected from bland commercialism and unthinking Blackpool Panning.
Colours are as accurate as possible but may differ slightly due to screen calibrations.
Shipping outside UK mainland is estimated, on occasion a variation will be emailed before dispatch.
Images printed at a Fuji approved professional laboratory on highest quality archive papers, Fuji Crystal or DP 2.
A Signed Certificate of Authenticity Card states the series number.