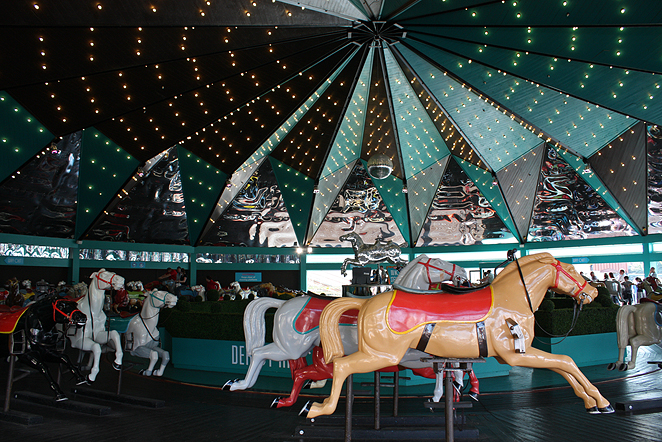 From: £22.00
Photographic Print. Derby Racer carousel horses fairground ride with Modernist Canopy at Blackpool Pleasure Beach.
This spectacular Modernist angular ceiling canopy covers the Derby Racer Carousel which opened at Blackpool Pleasure Beach in 1959. The silver racehorse as the central piece and the interior silver metallic dome catch reflections of the lights, creating a dazzling experience. One of only three in the world, it is a fairground carousel on a grand scale. It has 56 horses in four rows, the outside row seeming the fastest, originally the platform on which the horses are mounted were split into 4 rings so each row of horses would speed up and slow down, as if really racing each other. The ride now operates as a simple carousel ride.
Colours are as accurate as possible but may differ slightly due to screen calibrations.
Shipping outside UK mainland is estimated, on occasion a variation will be emailed before dispatch.
Images printed at a Fuji approved professional laboratory on highest quality archive papers, Fuji Crystal or DP 2.
A Signed Certificate of Authenticity Card states the series number.