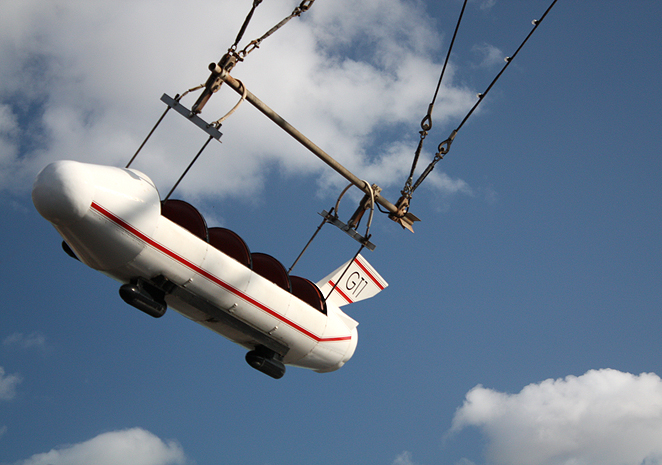 From: £22.00
Photographic Print. Captive Flying Machines futuristic fairground ride by Sir Hiram Maxwell at Blackpool Pleasure Beach.
When I looked for a date for this, from the photographs and experiencing its torpedo rocket shaped cars and angular structure, I thought it looks straight out of the Festival of Britain in 1951 but no, it opened in 1904. Sir Hiram Maxwell invented the Captive Flying Machines ride to promote and fund his new flying machine which was a huge steam powered folly and he opened this ride at several amusement parks in 1904, at Crystal Palace, Southport and New Brighton. The Blackpool ride is the sole survivor, incredibly through 116 years, 2 world wars and a tidal wave, it is still going strong. He was an inventor of mousetraps, weaponry and the first portable machine gun in the world which was used in World War I for which he was rewarded with a knighthood. It is said that he may have invented the incandescent light bulb prior to Thomas Edison but Edison was more knowledgable in patent law and stole the credit from him. The ride has rocket shaped passenger cars hanging from a central structure which spin, causing the cars to sway out at an angle, simulating flight.
When I used to go to Blackpool Pleasure Beach, I remember it as an experience that was more other worldly and ethereal than the other rides.
Colours are as accurate as possible but may differ slightly due to screen calibrations.
Shipping outside UK mainland is estimated, on occasion a variation will be emailed before dispatch.
Images printed at a Fuji approved professional laboratory on highest quality archive papers, Fuji Crystal or DP 2.
A Signed Certificate of Authenticity Card states the series number.