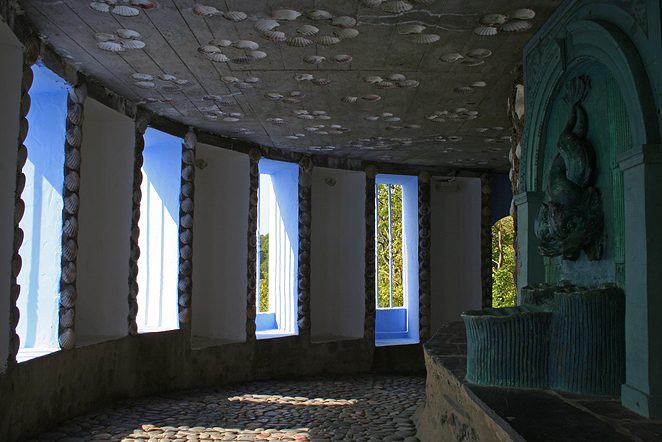 From: £22.00
Photographic Print. Shell Grotto in the Rotunda below Belvedere Outlook and an Astrolabe in Portmeirion village, Wales.
Inside the Rotunda, the Shell Grotto has a blue glow caused by light coming in through the slit openings onto the blue paint. A sculpture of two entwined Dolphins look down onto 3 shells. The ceiling and walls are embedded with seashells and glass, with stone seating curving around the Rotunda. Above this, the terrace of the Belvedere Outlook provides 360 degree views across the Afon Dwyryd estuary where Patrick McGoohan as Number 6 ran across the sands to escape from Rover. In the centre is an Astrolabe, an ancient astronomical device which is a handheld model of the universe. Its various functions also make it an elaborate inclinometer and an analog calculation device capable of working out several kinds of problems in astronomy.
In Paintings in Gouache a shell is depicted in Portmeirion 3. Phoenix, Shell and Gloriette Windows.
Colours are as accurate as possible but may differ slightly due to screen calibrations.
Shipping outside UK mainland is estimated, on occasion a variation will be emailed before dispatch.
Images printed at a Fuji approved professional laboratory on highest quality archive papers, Fuji Crystal or DP 2.
A Signed Certificate of Authenticity Card states the series number.