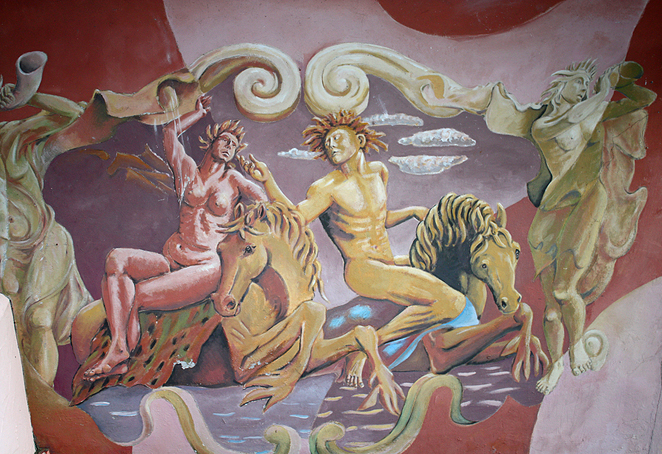 From: £22.00
Photographic Print. Mythological Fresco mural of Neptune by Feibusch on the Anchor house, Portmeirion.
This mural was painted in 1963 by Hans Nathan Feibusch but it seems in the 1950's illustration style: Pastel colours, visible brushstrokes, layered tones, slightly surreal and the way the mythological figures and horse creatures are set in abstract curved shapes that seem to have nothing to do with the scene but work in framing and pulling together the figures and adding to the surreal quality. He was a German-Jewish artist whose work was labelled as 'decadent' and banned in Germany, featuring in Goebbels, the notorious Degenerate Art Exhibition in 1937. He designed posters for Shell and the London Underground and he was responsible for more murals in churches in England than any other 20th century artist.
Colours are as accurate as possible but may differ slightly due to screen calibrations.
Shipping outside UK mainland is estimated, on occasion a variation will be emailed before dispatch.
Images printed at a Fuji approved professional laboratory on highest quality archive papers, Fuji Crystal or DP 2.
A Signed Certificate of Authenticity Card states the series number.