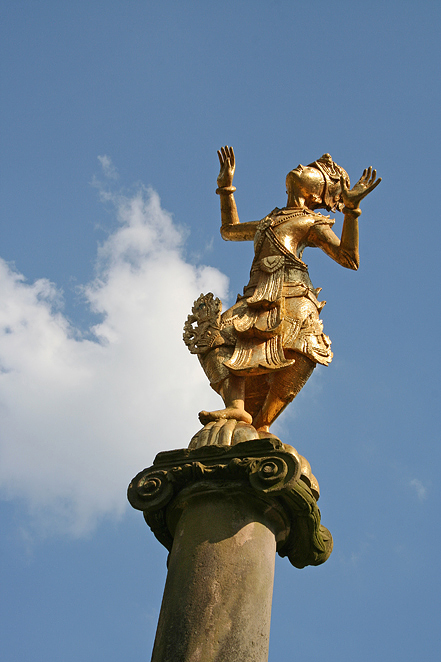 From: £22.00
Photographic Print. Gold Thai statue on Ionic classical column in blue sky and clouds at the Piazza.
They are known in Portmeirion as the Thai dancing figures but are sometimes called the Siamese twins. It is not recorded from where and when Sir Clough Williams-Ellis aquired them, however there is a painting by Meryl Watts who painted at Portmeirion from 1942 onwards and an undated painting featuring the statues seems to be from the mid 1950s. They overlook Palm trees and the Piazza Pool which were built in 1964 - 1965. These Ionic columns are 2 of the 8 rescued from the Colonnade of Hooton Hall, Chester 30 years before 4 of them were used in the Gloriette. When it rains or the weather is changeable, I wait for the sun to shine to photograph the village, architecture and gardens because I think it is like a beautiful stage set waiting for the spotlights it deserves to be switched on, so that it glitters.
Colours are as accurate as possible but may differ slightly due to screen calibrations.
Shipping outside UK mainland is estimated, on occasion a variation will be emailed before dispatch.
Images printed at a Fuji approved professional laboratory on highest quality archive papers, Fuji Crystal or DP 2.
A Signed Certificate of Authenticity Card states the series number.