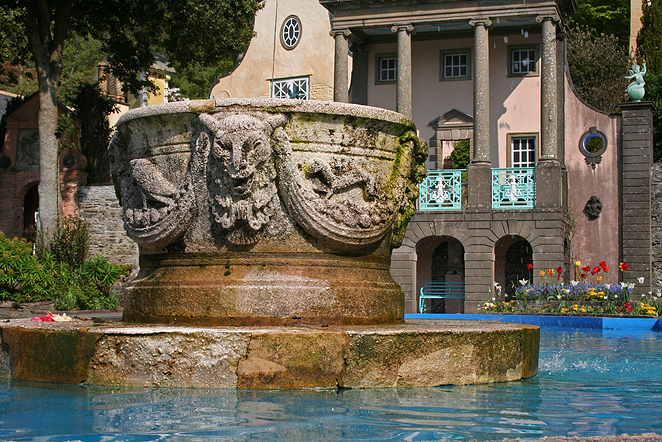 From: £22.00
Photographic Print. Classical fountain in the Piazza Pool in front of the Gloriette at Portmeirion village.
The pool was used in the scene in The Prisoner where Rover, the white sphere hovered threateningly on the fountain water surface. The turquoise water is surrounded by flower beds, Palm trees, 2 gold Thai dancing figure statues, the Gloriette building and Telford Tower. Rover primarily prevented escaping, serving as a guard agent or herder when a character was required to take a certain action or direction, or to prevent their access to some part of the Village. The white ball often emerged from the sea and when it appeared people froze, its mere presence was often enough to achieve its objectives of controlling them and stopped them from escaping, as to disobey would mean death through suffocation. For the final version of Rover, production manager Bernard Williams was inspired by the sight of a weather balloon above Portmeirion.
Colours are as accurate as possible but may differ slightly due to screen calibrations.
Shipping outside UK mainland is estimated, on occasion a variation will be emailed before dispatch.
Images printed at a Fuji approved professional laboratory on highest quality archive papers, Fuji Crystal or DP 2.
A Signed Certificate of Authenticity Card states the series number.