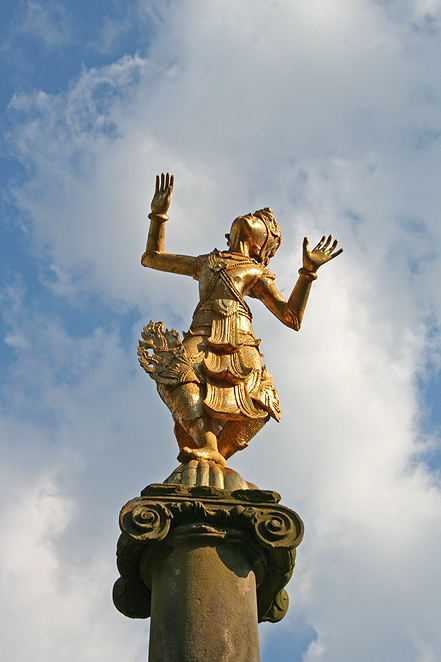 From: £22.00
Photographic Print. Gold Thai statue on Ionic column in the clouds with hands and face to the sky.
They are known in Portmeirion as the Thai dancing figures but are sometimes called the Siamese twins. It is not recorded from where and when Sir Clough Williams-Ellis aquired them, however there is a painting by Meryl Watts who painted at Portmeirion from 1942 onwards and an undated painting featuring the statues seems to be from the mid 1950s. Standing high on Classical Ionic columns, they overlook Palm trees and the Piazza Pool which were built in 1964 - 1965. Sir Clough Williams-Ellis incorporated many architectural styles from a wide range of periods from around the world and collected a diverse range of statues, sculptures, fountains and curiosities.
In Paintings in Gouache there are 4 paintings about Portmeirion and The Prisoner who was played compellingly by Patrick McGoohan as the angry passionate Number 6. Scott Hill in Wired wrote, "When he first thought up the influential series, McGoohan wrote a 50-page Prisoner bible that explained everything actors, producers and other principals needed to know."
Colours are as accurate as possible but may differ slightly due to screen calibrations.
Shipping outside UK mainland is estimated, on occasion a variation will be emailed before dispatch.
Images printed at a Fuji approved professional laboratory on highest quality archive papers, Fuji Crystal or DP 2.
A Signed Certificate of Authenticity Card states the series number.