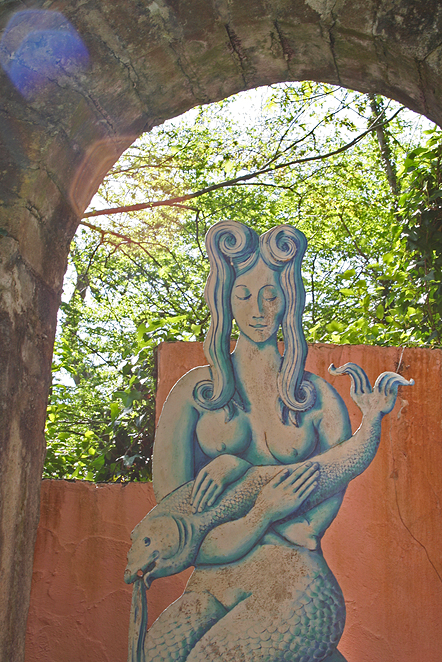 From: £22.00
Photographic Print. Trompe L'Oeil Mermaid holding a fish in archway of the Old Toll Gate, Portmeirion.
The mermaid at the entrance of Portmeirion village looks serene in blue light. I asked Robin Llywelyn about her. He said, "The mermaid from the roof of the Observatory tower is now at the entrance, at the old tollgate. Clough's plan for the Observatory Tower (often called the Camera Obscura) included a mermaid cut out on the apex, similar in size and style but holding something above her head. We found the sheet metal cut out in the builders yard (known as "the compound") probably about 25 years ago, it was covered in rust from head to toe but a bit of cleaning revealed etched lines delineating the main features. A local signwriter/artist called Nigel Simmons used these lines to recreate what we thought she would have looked like in the 1930s. No photos survive of this mermaid in situ, if you consider the size, weight and surface area of this cutout and the strong winds that blow in off the estuary I think one can fairly well imagine that she would not have lasted the winter on the top of the Observatory Tower before either bending to the wind or crashing to the ground, to be replaced (if she was ever installed, as no evidence exists that she was actually used, perhaps the impracticality might have become apparent before she was hoisted up the tower) by a much more wind friendly star."
In Paintings in Gouache she is a fragment in Portmeirion 4. Mermaid take care not to...
Colours are as accurate as possible but may differ slightly due to screen calibrations.
Shipping outside UK mainland is estimated, on occasion a variation will be emailed before dispatch.
Images printed at a Fuji approved professional laboratory on highest quality archive papers, Fuji Crystal or DP 2.
A Signed Certificate of Authenticity Card states the series number.