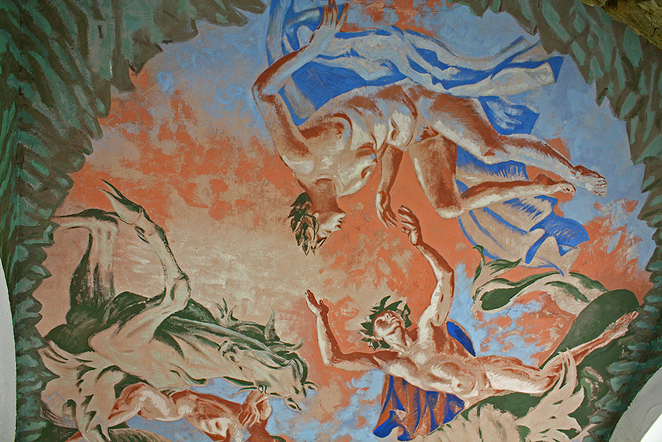 From: £22.00
Photographic Print. Fresco by Fiebusch depicting Mythological deity figures beneath the archway of the Gate House.
This creates a grand entrance into the village. Sunlight or floodlights at night reflect up through the arches onto the beautiful chalky colours of the Classical style mural which then seem to irradiate down which makes you dwell longer under it, gazing up. This ceiling mural is by Hans Nathan Feibusch, 1898 - 1998, a German-Jewish artist who settled in England in 1933 following Nazi persecution and the labelling of his art as 'decadent' and joined the London Group of artists in 1934. He painted several at Portmeirion including this ceiling of Mythological gods under the Gate House. Sir Clough Williams-Ellis wrote, "...his profane achievements at Portmeirion are as lively, his pagan deities as vigorous and convincing as well could be." Feibusch also contributed drawings which Clough would have cut out into sheet iron and painted when short of a statue. The Gate House was built in 1954-55, listed Grade II in 1971 and was Clough's first building at Portmeirion after the war following the lifting of building restrictions in 1954. He incorporated the existing terrain, making a feature of the rugged rock formations upon which the Gate House was constructed. The random pattern of windows and swags give the Gate House a Baroque character. During the 1960s it was often taken for the Summer season by Brian Epstein, the wardrobe in the main bedroom was actually built at his request and to his own specification.
Colours are as accurate as possible but may differ slightly due to screen calibrations.
Shipping outside UK mainland is estimated, on occasion a variation will be emailed before dispatch.
Images printed at a Fuji approved professional laboratory on highest quality archive papers, Fuji Crystal or DP 2.
A Signed Certificate of Authenticity Card states the series number.