Shells on Blue in The Rotunda. Portmeirion 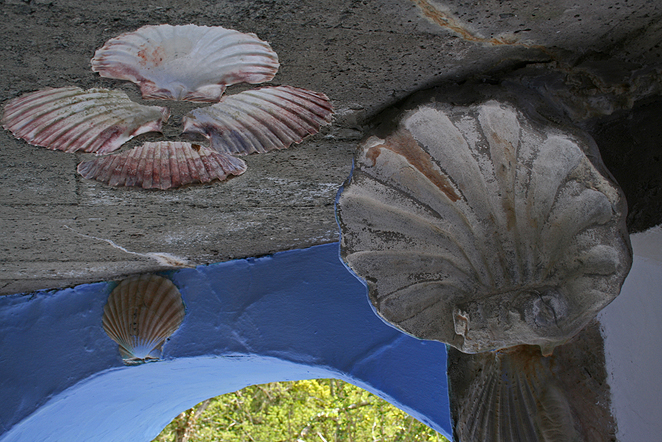 From: £22.00
Photographic Print. Shell Grotto in The Rotunda below an Astrolabe and Belvedere Outlook in Portmeirion village.
Down along a path to the left from the Gate House entrance this round look-out point and it's blue grotto interior decorated with shells has excellent views of the estuary beach where Patrick McGoohan was filmed running on the beach to escape from the white sphere. The Prisoner was a psychological drama which had elements of science fiction, surrealism, allegory and an aspect of autobiography for the creator, actor and producer, Patrick McGoohan. Scott Hill from Wired writes, "Ergodic storytelling's narrative and visual hypertexting, which has revolutionized new media, is what helped The Prisoner stand out from the sci-fi of its time, which included Star Trek. It commanded a devotion to study the show not as passive entertainment, but as nontrivial programming to be decoded."
In Paintings in Gouache the shell is depicted in Portmeirion 3. Phoenix, Shell and Gloriette Windows.
Colours are as accurate as possible but may differ slightly due to screen calibrations.
Shipping outside UK mainland is estimated, on occasion a variation will be emailed before dispatch.
Images printed at a Fuji approved professional laboratory on highest quality archive papers, Fuji Crystal or DP 2.
A Signed Certificate of Authenticity Card states the series number.