Seat in the Woods 1. Portmeirion 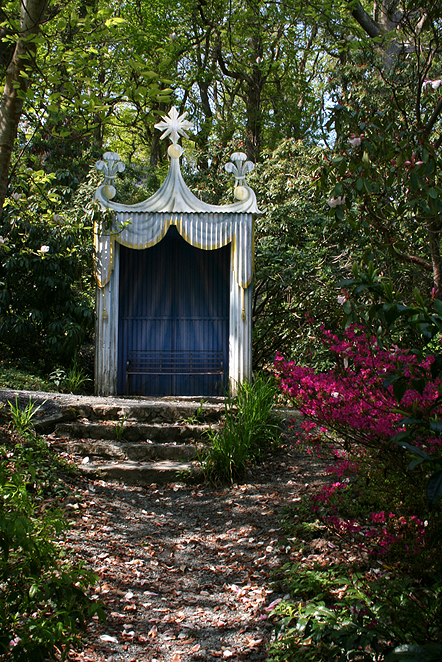 From: £22.00
Photographic Print. Seat in a theatrical corrugated iron shelter in Portmeirion Woods.
Beyond the Triumphal Arch in the village, several paths radiate into Salutation Wood where Sir Clough Williams-Ellis designed narrow vistas rising to a number of theatrical eye catchers such as "Plenty", a sheet metal cut-out by Hans Feibusch and a corrugated iron shelter. Sir Clough would often hold court on the seat here with anyone passing by. This whole area is known for the rich diversity of its rare and unusual plants.
The Prisoner is a surreal tv series written by and starring Patrick McGoohan as a resigned spy who finds himself trapped in a mysterious, surreal place known as The Village from where it is impossible to escape and he has no memory of how he arrived. Sir Clough Williams-Ellis rescued endangered structures and fragments from all over Britain and the world for his "Home for Fallen Buildings."
Colours are as accurate as possible but may differ slightly due to screen calibrations.
Shipping outside UK mainland is estimated, on occasion a variation will be emailed before dispatch.
Images printed at a Fuji approved professional laboratory on highest quality archive papers, Fuji Crystal or DP 2.
A Signed Certificate of Authenticity Card states the series number.