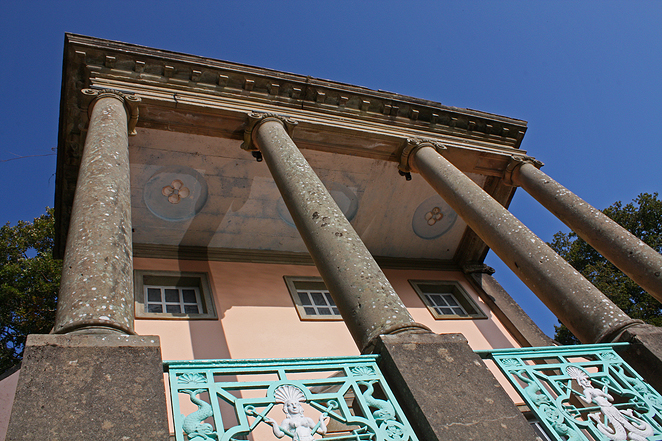 From: £22.00
Photographic Print. Gloriette building overlooking the Piazza Pool and Classical Fountain at Portmeirion.
This is a decorative facade with 5 Trompe L'Oeil windows surrounding an open doorway and 5 mermaid and fish iron balustrades on the balcony which Sir Clough Williams-Ellis rescued from the Sailor's Home in Liverpool. In the 1930s 8 columns by the 18th century architect Samuael Wyatt were salvaged from the colonnade of Hooton Hall, Chester, buried, then rediscovered years later and used as the 4 striking Ionic columns in the Gloriette in 1964-1965.  "For nearly thirty years I forgot all about this rather rash and extravagant purchase until I had my Gloriette idea by which time these bits and pieces could nowhere be found. Ultimately they were tracked down and actually dug up from under a garden that had been made on top of them." A little earlier in the 1950s 2 others were used as pedastals for the gold Thai dancing figure statues, sometimes called Burmese or Siamese twins.
Architectural fragments are painted in Portmeirion 3 in Paintings in Gouache.
Colours are as accurate as possible but may differ slightly due to screen calibrations.
Shipping outside UK mainland is estimated, on occasion a variation will be emailed before dispatch.
Images printed at a Fuji approved professional laboratory on highest quality archive papers, Fuji Crystal or DP 2.
A Signed Certificate of Authenticity Card states the series number.