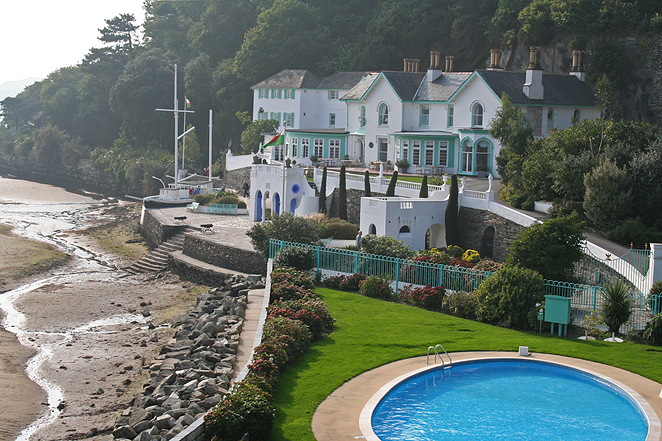 From: £22.00
Photographic Print. Hotel Portmeirion in the village, Snowdonia, Wales.
The main building of the Hotel Portmeirion was built around 1850, extended by Sir Clough Williams-Ellis in 1925 & 1930, in 1931 a curvilinear restaurant in a more Modern concept was added and in 1971 it was listed Grade II. When Clough discovered it in 1925 he was faced with dereliction and an overgrown wilderness. "I obviously had to use the old house on the sea's edge for something and, if I wanted a village, it would have to have an economic basis and the obvious thing seemed to be tourism. It was at Easter 1926, after less than a year's preparation, that the original old house, little altered, opened somewhat tentatively as an unlicensed hotel." On the night of Friday 5 June 1981 the hotel was gutted by fire but reconstruction started almost immediately and eventually all its main rooms were mostly restored to their former state and it reopened in 1988. Clough's description of the original interior: "As you enter the hall past a massive carved Italian renaissance fireplace,... stair with an elegant balustrade...we do know where the library at its foot came from, and it was the Great Exhibition of 1851 - all complete with its intricately carved doors and mantelpiece...The Mirror Room, next to it, reflects as you enter the view outside the wrong way round; the mantelshelf is supported by the functional haloes of a pair of carved saints and the inlaid parquet is that surviving the room's use as a curs' kennel - strangely without a mark."
The Hotel enjoyed a celebrated clientele such as H.G. Wells, George Bernard Shaw, Bertrand Russell, Sir Kenneth Clarke and No l Coward wrote Blithe Spirit there in 5 days. Frank Lloyd Wright came in 1956 and approved. During the 1960s the Gate House was often taken for the Summer season by Brian Epstein and George Harrison celebrated his 50th birthday there.
Colours are as accurate as possible but may differ slightly due to screen calibrations.
Shipping outside UK mainland is estimated, on occasion a variation will be emailed before dispatch.
Images printed at a Fuji approved professional laboratory on highest quality archive papers, Fuji Crystal or DP 2.
A Signed Certificate of Authenticity Card states the series number.