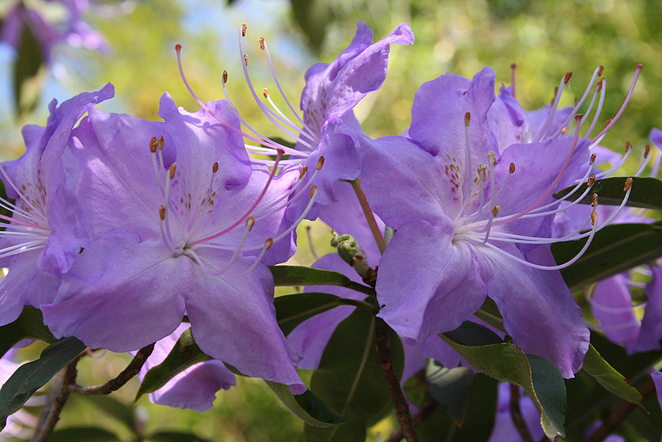 From: £22.00
Photographic Print. Lilac Rhododendron blossoms in Portmeirion woods, Wales.
Before past glaciations, during periods with a warmer climate than now, some species were present in Britain but failed to return after the last glacial maximum, c.20,000 years ago. Amongst these are Rhododendron and Rabbits, later reintroduced and are now considered invasive, non-native, not indigenous by some conservationists. Some give this as a reason for ripping them out, a reason which for some species is not true. Rhododendron Ponticum is the only variety which causes problems but I believe landscapers often get rid of all Rhododendrons, as they prefer a wood to be a sparsity of trees rather than a wood. A wonderful example of how this varierty has been replaced is at Portmeirion Woods. Robin Llywelyn explained to me, "Gwylit woods had become choked with them, they turn the soil acidic and no wildlife inhabits ponticum woods and they were finally eradicated in the 1980s. The Victorian rhodedendrons and other exotic trees have flourished since then, we have re-planted some that were close to dying out and the collection is now back to full strength." There is a diverse and extensive variety of species, many of which are exotic.
View Pink Pathway 1 in the Portmeirion photographic section.
Colours are as accurate as possible but may differ slightly due to screen calibrations.
Shipping outside UK mainland is estimated, on occasion a variation will be emailed before dispatch.
Images printed at a Fuji approved professional laboratory on highest quality archive papers, Fuji Crystal or DP 2.
A Signed Certificate of Authenticity Card states the series number.