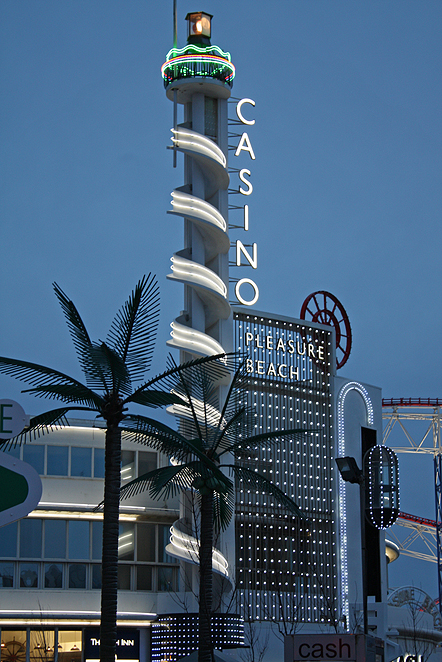 From: £22.00
Photographic Print. Illuminated Casino tower at night with Palm trees, Las Vegas at Blackpool Pleasure Beach.
An amusement park was opened in 1896 by William George Bean after he failed in his attempt to become an advertising man on New York's Madison Avenue. In 1903, Bean, along with John Outhwaite, purchased 30 acres of land to expand the amusement park, aiming to create a park similar to Coney Island in the USA, that would "make adults feel like children again and inspire gaiety of a primarily innocent character". In 1905 the name Blackpool Pleasure Beach was founded but Outhwaite died in 1911, leaving the business to Bean. In 1923, land was reclaimed from the sea front and the park moved to its 44 acre current location. In 1929, Bean died leaving the park to his daughter who had previously married a young businessman, Leonard Thompson and it has remained in the Thompson family since then. Thompson brought in Joseph Emberton who designed the Pleasure Beach Casino building in 1937. Today there is a big tv screen spoiling the listed Emberton building.
Colours are as accurate as possible but may differ slightly due to screen calibrations.
Shipping outside UK mainland is estimated, on occasion a variation will be emailed before dispatch.
Images printed at a Fuji approved professional laboratory on highest quality archive papers, Fuji Crystal or DP 2.
A Signed Certificate of Authenticity Card states the series number.