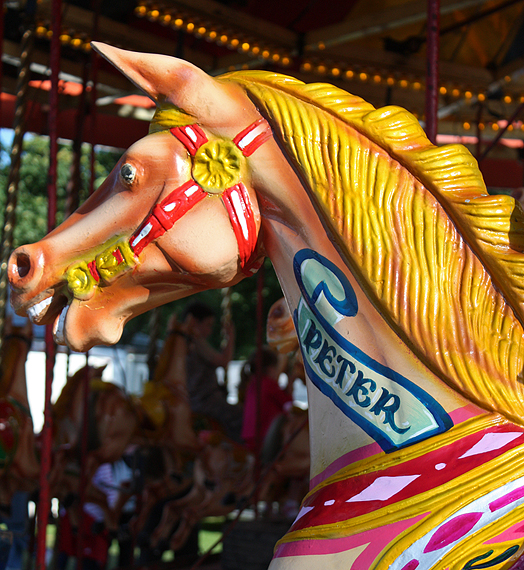 From: £22.00
Photographic Print. Carousel horse Peter at a travelling fairground in England.
The word carousel was first used to describe a game played by Arabian and Turkish horsemen in the 12th century, tossing a clay ball filled with perfume between riders. The Italian crusaders observing called it Carosello and the French adopted this game so the word became carousel. By the mid-19th century the platform carousel was developed and became popular at fairs in England. Animals and chariots were suspended from centre poles fixed to a circular floor and rotated around. These carousels were operated manually by the operator or by ponies. The first steam powered mechanical roundabout, invented by Thomas Bradshaw, appeared at Aylsham fair in 1861 then the engineer Frederick Savage became the chief innovator in the construction of fairground carousels, in 1868 installing them with gears and offset cranks, thus giving the animals their well known up and down motion. The oldest existing carousel was made in 1780 and stands at the Wilhelmsbad Park in Germany.
Colours are as accurate as possible but may differ slightly due to screen calibrations.
Shipping outside UK mainland is estimated, on occasion a variation will be emailed before dispatch.
Images printed at a Fuji approved professional laboratory on highest quality archive papers, Fuji Crystal or DP 2.
A Signed Certificate of Authenticity Card states the series number.