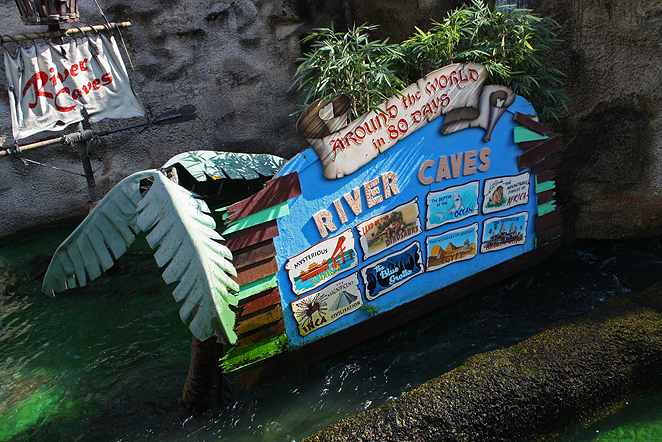 From: £22.00
Photographic Print. The fun fantasy fairground ride River Caves at Blackpool Pleasure Beach, England.
An amusement park opened in 1897 by William G Bean and in 1903, Bean and John Outhwaite purchased 30 acres of land to expand the amusement park to create a fairground similar to Coney Island, USA. One of the first attractions was a charming water ride which opened in 1905 under the name 'The River Caves of the World', it is endearing that it is now over a century old yet is timeless in creating a sense of exploration, an atmosphere of wonder with a dramatic climax of a small log flume. The Tunnel of Love sign is a relic from being used as a set in Coronation Street.
The name of this dark ride is due to the fact that most were themed around subterranean caverns with stalagmites and stalactites enclosing detailed displays from around the world, through time, from myth and legend. The concept of the river caves ride is boats meandering along an artificial river through decorated caves and tunnels featuring different themed scenes with sounds, props, animatronics and visual effects. Despite their popularity in the early to mid 20th century, river caves are now rare; the shift in focus to the thrill ride from the latter half of the 20th century and the sheer age of the design and mechanics of these fairground rides means that many have been dismantled, sold or demolished.
Colours are as accurate as possible but may differ slightly due to screen calibrations.
Shipping outside UK mainland is estimated, on occasion a variation will be emailed before dispatch.
Images printed at a Fuji approved professional laboratory on highest quality archive papers, Fuji Crystal or DP 2.
A Signed Certificate of Authenticity Card states the series number.