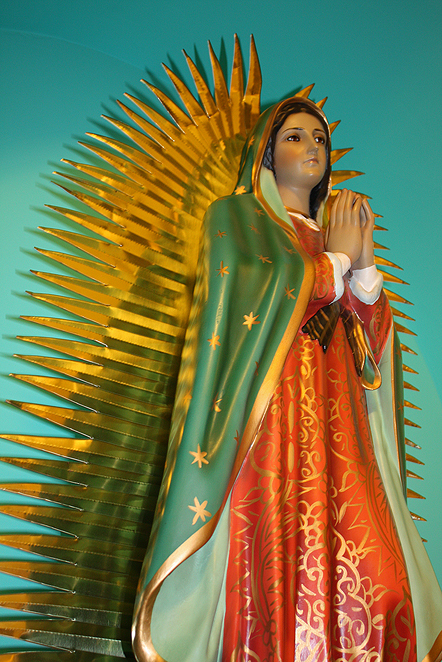 From: £22.00
Photographic Print. Statue of Our Lady Guadalupe, Patron Saint of the Americas, Mission Delores, San Francisco.
I am not Catholic but in 2010 I came to this mission and tranquil cemetery garden to find some peace and I connected with the statue in resplendent colour and gold wings in the Basilica and to the story of Guadalupe, Queen of Mexico. In 1531, a poor Aztec Indian named Juan Diego was walking on Tepeyac Hill near Mexico City where he encountered a beautiful lady surrounded by a bright ball of light. The lady said she was the Virgin Mary and told him to go to the Archbishop and tell him she wanted a church to be built at Tepeyac Hill. The bishop did not say yes so the lady appeared again and told him to ask the bishop again. The bishop did not believe him and wanted a sign from the lady as proof of who she was. The lady told Juan to go to the hill where he would find flowers growing and to bring them to her. It was desert with a barren hilltop but he found a bloom of Castilian roses not native to Mexico. She arranged them in his poncho and told him to go as her ambassador, to show them to no-one else but the bishop and say with this sign she requested that a church be built on that site and this time he would believe all that he told him. When he opened his poncho, the bishop fell to his knees because on the poncho was imprinted a picture of the Blessed Virgin Mary as Juan had described her. So a basilica was built on the site. During this, Juan's uncle had been dying but was now completely cured. His uncle told him he had met a woman surrounded by light who told him she had just sent his nephew to the bishop with a picture of herself. She said, "Call me and my image 'Santa Maria de Guadalupe' ".Entrance cost is $5 but if you say you are going in to pray you can pay a donation instead.
To see more of these places and learn more, you can download my Cool and Retro Guide to San Francisco which is illustrated with my photographs.
Colours are as accurate as possible but may differ slightly due to screen calibrations.
Shipping outside UK mainland is estimated, on occasion a variation will be emailed before dispatch.
Images printed at a Fuji approved professional laboratory on highest quality archive papers, Fuji Crystal or DP 2.
A Signed Certificate of Authenticity Card states the series number.