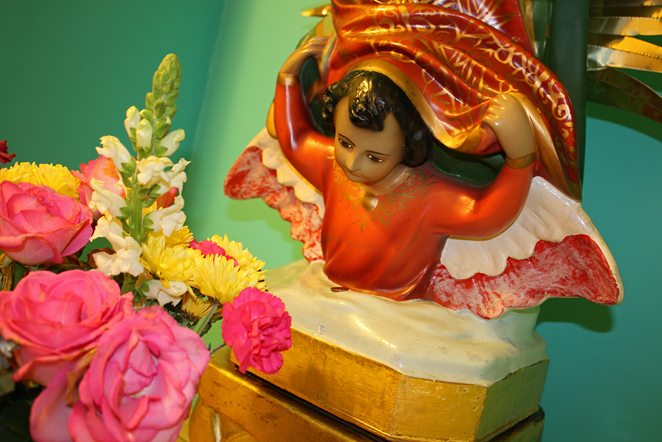 From: £22.00
Photographic Print. Statue of Guadalupe angel, Queen of Mexico or the Americas in Mission Delores, San Francisco.
The Guadalupe icon is Mexico's most popular religious and cultural image. This photograph of a statue was taken in the Mission Delores Basilica in San Francisco, California, built in 1913 next to Mission Delores, which was founded in 1776. It was named after a nearby creek 'Arroyo de los Delores' or 'Creek of Sorrows'. It is the oldest intact building in the city and the cemetery is the only one remaining within the city limits and is the resting place of Ohlone, Miwok, other first people and notable pioneers. The cemetery was used as a location in 'Vertigo'. The statue is based on the vision who appeared to the boy in Mexico city, asking him to collect Roses in his ponsho to prove his experience and her request to build a church on the site. In 1977 the poncho was examined using infrared and digital enhancement and the method used to create the image is still unknown. It is kept in the new basilica but perpetual adoration is held at the ancient Basilica of Our Lady Guadalupe and it is the most popular religious pilgrimage site in the Western Hemisphere.
To see more of these places and learn more, you can download my Cool and Retro Guide to San Francisco which is illustrated with my photographs.
Colours are as accurate as possible but may differ slightly due to screen calibrations.
Shipping outside UK mainland is estimated, on occasion a variation will be emailed before dispatch.
Images printed at a Fuji approved professional laboratory on highest quality archive papers, Fuji Crystal or DP 2.
A Signed Certificate of Authenticity Card states the series number.