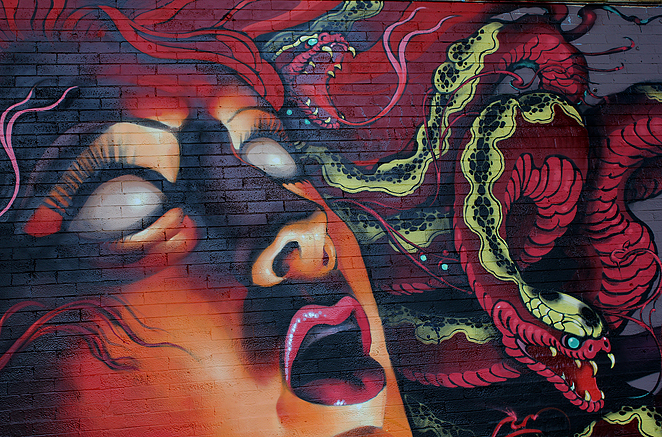 From: £22.00
Photographic Print. Graffiti street art Medusa Gorgon mural on Haight Street, Haight-Ashbury, San Francisco.
The Phoenix mural is also by Lango and can be viewed in this photographic section. I photographed this Gorgon mural by Lango in 2011 at Masonic Street on Haight Street in the Haight-Ashbury neighbourhood, which was the epicentre of hippie culture in the 1960s. Even though I hate snakes, this mural was spectacular, I don't know why it was painted over with a poor replacement by Apex. In Greek mythology, Medusa was a celibate priestess of Athena with golden hair but after being wooed by Poseidon, having sex with him on the floor of a temple to Athena, for this offence, the goddess punished her. Each wavy lock of her beautiful hair that had charmed Poseidon was changed into a venomous snake, her beautiful eyes turned into blood shot, furious orbs and her white skin turned into a horrible tinge of green. Anyone who looked into her eyes was turned into stone. She was one of the 3 Gorgon sisters but only Medusa was mortal. Deliverance came to her in death when she was beheaded by the hero Perseus using a mirrored shield from Athena, gold, winged sandals from Hermes, a sword from Hephaestus and Hades's helm of invisibility. He then used her head as a weapon to slay Cetus, it retained its ability to turn onlookers to stone, until he gave it to the goddess Athena to place on her shield. In classical antiquity the image of the head of Medusa appeared on the Gorgoneionin, a device to avert evil.
To see more of these places and learn more, you can download my Cool and Retro Guide to San Francisco which is illustrated with my photographs.
Colours are as accurate as possible but may differ slightly due to screen calibrations.
Shipping outside UK mainland is estimated, on occasion a variation will be emailed before dispatch. Images printed at a Fuji approved professional laboratory on highest quality archive papers, Fuji Crystal or DP 2.
A Signed Certificate of Authenticity Card states the series number.