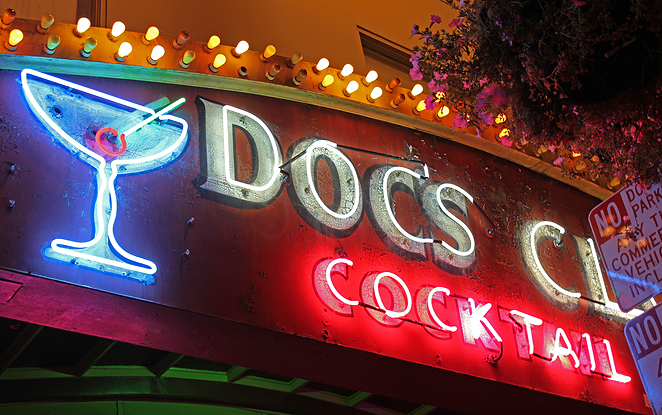 From: £22.00
Photographic Print. Retro neon sign of Doc's Clock Cocktails dive bar on Mission Street, Mission, San Francisco.
This dive cocktail bar was on Mission Street at the end of 22nd Street when I photographed it but it is now at 2577 Mission Street and thankfully they took the retro neon sign with them. Suckow, a former schoolteacher, bought the business in 2005, but the bar's history dates to 1951, when it was known as the Clock bar. A dentist, Ralph Mancuso, bought it 10 years later and re-named it Doc s Clock, installing the neon sign that would come to define it as a Mission District landmark. So I mistakenly imagined that it was named after the Doc and the clock in Back to The Future ! a 1950's style bar themed around the film. Suckow was able to buy Doc s Clock at a discount because she promised its previous owners, Elizabeth Zoria and Susan Hertzfeldt, that she would keep it divey. Even as that area of the Mission became dotted with high end restaurants, Doc s Clock remained the grungy, offbeat dive bar. At the lighting of the sign the San Francisco Chronicle wrote, 'The lighting marked a conclusion to a nearly two year saga involving Suckow, Doc's and a frought relationship with a landlord. It was a saga that came to represent much more than the plight of one individual dive bar. For many San Franciscans, the displacement of Doc s Clock and its sign signified everything that was wrong about the way the city and especially the Mission has changed.' The city Planning helped them to negotiate with the landlord. I just wish they had shown the same strength and respect to a historic neon sign dive bar with Hemlock Tavern on Polk Street which was torn down for more condominiums.
To see more of these places and learn more, you can download my Cool and Retro Guide to San Francisco which is illustrated with my photographs.
Colours are as accurate as possible but may differ slightly due to screen calibrations.
Shipping outside UK mainland is estimated, on occasion a variation will be emailed before dispatch.
Images printed at a Fuji approved professional laboratory on highest quality archive papers, Fuji Crystal or DP 2.
A Signed Certificate of Authenticity Card states the series number.