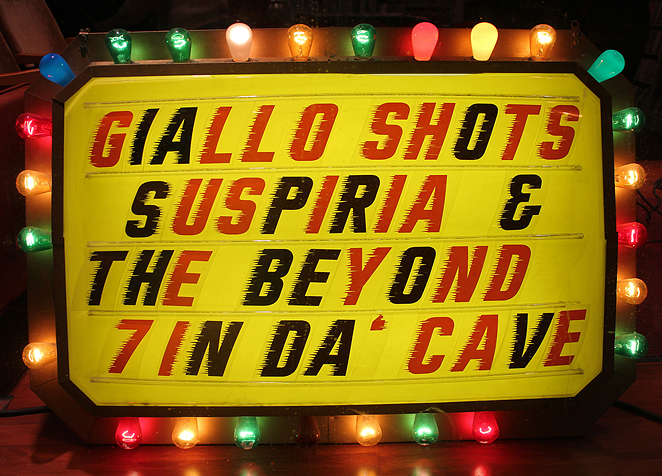 From: £22.00
Photographic Print. Lost Weekend Video Store Cinecave on Mission Street, New Mission Theatre, San Francisco.
Lost Weekend Video Store and Cinecave moved from Valencia Street to the Alamo Drafthouse Cinema at the New Mission Theatre at 2550 Mission Street in Mission neighbourhood, San Francisco. Hopefully it is as unique as this: In the Valencia Street store it was a cool name and address for a retro video store which made you think videos came out in the 1960s, not the 1980s. The retro sign edged with coloured light bulbs in the window with film showings, a 1960's juke box and a 'Galaga' video arcade game created this effect. They had a wonderful collection of horror, cult classics, director's section drama, TV and new releases. Cinecave was an intimate independant cinema in the basement, a screen with a table lamp on each side and on the tiny bar from which they served wine, beer, chocolate and $1 popcorn made as you order it. They had unusual film showings most evenings presented by a staff member. I watched 'Twin Peaks' pilot and 1st episode while being served cherry pie, a night of episodes 3, 4 and 5 and an Italian horror night, 'Susperia' and 'The Beyond'. Spooky. In December 2015 the New Mission Theatre reopened with a $10 million restoration, 5 screens including a 320 seat and a boutique 34 seat and announced it would preserve Le Video's film 90,000 video collection and partner with Lost Weekend Video to rent them in the lobby.
To see more of these places and learn more, you can download my Cool and Retro Guide to San Francisco which is illustrated with my photographs.
Colours are as accurate as possible but may differ slightly due to screen calibrations.
Shipping outside UK mainland is estimated, on occasion a variation will be emailed before dispatch.
Images printed at a Fuji approved professional laboratory on highest quality archive papers, Fuji Crystal or DP 2.
A Signed Certificate of Authenticity Card states the series number.