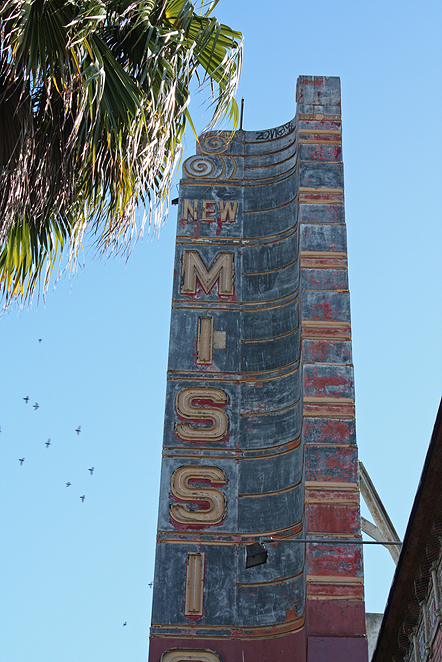 From: £22.00
Photographic Print. New Mission Theatre at 2550 Mission Street, Mission District, San Francisco.
In this photograph the fading paint, birds flying past and the Palm tree moving in the wind create a feeling of lost grandeur. The New Mission Theatre was built in 1910, enlarged in 1916 by the Reid Brothers, San Francisco movie theatre architects, the most prolific in the Bay area, who designed its large neoclassical revival style auditorium, then in 1932, Timothy Pflueger designed a renovated New Mission in an Art Deco Style. The fate of this movie palace remained in limbo since it closed in 1993 but the Save New Mission preservation group worked actively to ensure it did not disappear. Sf Gate reported in January, 2013 that the San Francisco Planning Commission gave final approval to the $10 million renovation of the theatre and construction of an adjoining 114 unit condominium. A 348 seat cinema and four smaller screening rooms, a restaurant and bar opened in December 2015 as the Alamo Drafthouse Cinema including the relocated Lost Weekend Video Store and Cinecave. I felt sad when I saw photographs of it, having spent so much money, the design of the apartment block adjoining it clashes and jars with the striking simplicity of the Art Deco design of the theatre, over complicated lines and angles zig zagging in and out which jar against it. The obvious magnificence of the theatre is its smooth curving lines, what were they thinking to put lots of jarring angles which take something away from it, it's cruel. The green neon is harsh. It looked better before when it had crumbling grandeur. A spoiled opportunity.
To see more of these places and learn more, you can download my Cool and Retro Guide to San Francisco which is illustrated with my photographs.
Colours are as accurate as possible but may differ slightly due to screen calibrations.
Shipping outside UK mainland is estimated, on occasion a variation will be emailed before dispatch.
Images printed at a Fuji approved professional laboratory on highest quality archive papers, Fuji Crystal or DP 2.
A Signed Certificate of Authenticity Card states the series number.