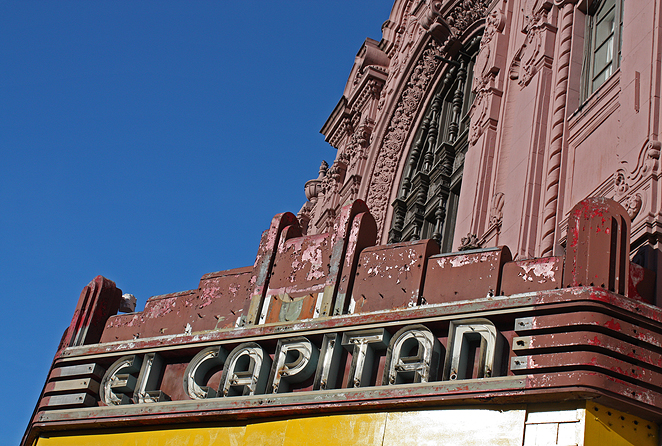 From: £22.00
Photographic Print. El Capitan Theatre at 2353 Mission Street in the Mission District, San Francisco, California.
The surviving grand façade is Churriqueresque, Mexican Baroque but the lost interior of the El Capitan movie palace was Spanish Colonial Revival. It opened in 1928 as the most opulent of the Mission Street theatres and the second largest in the city with 2578 seats. In 1957 it closed, in 1964 it was demolished but the rest of the building, shops, a rooming house and the old marquee remain. Sadly what was once the cinema lobby, motorists can drive through into a parking lot. The architect, Gustave Albert Lansburgh, was the master architect of theatre design along the west coast from 1900 to 1930. Earlier he was a draftsman for Bernard Maybeck who designed the Bellaire Tower in the Spanish Colonial Style. Mission Street is interesting in being mainly Hispanic and has the faded character of a grand street lost with crumbling theatres, Palms teetering on extremely tall stalks and the retro signs of Bruno's bar at 20th, Doc's Clock Cocktails at 22nd and the the Beauty Bar at 19th.
To see more of these places and learn more, you can download my Cool and Retro Guide to San Francisco which is illustrated with my photographs.
Colours are as accurate as possible but may differ slightly due to screen calibrations.
Shipping outside UK mainland is estimated, on occasion a variation will be emailed before dispatch.
Images printed at a Fuji approved professional laboratory on highest quality archive papers, Fuji Crystal or DP 2.
A Signed Certificate of Authenticity Card states the series number.