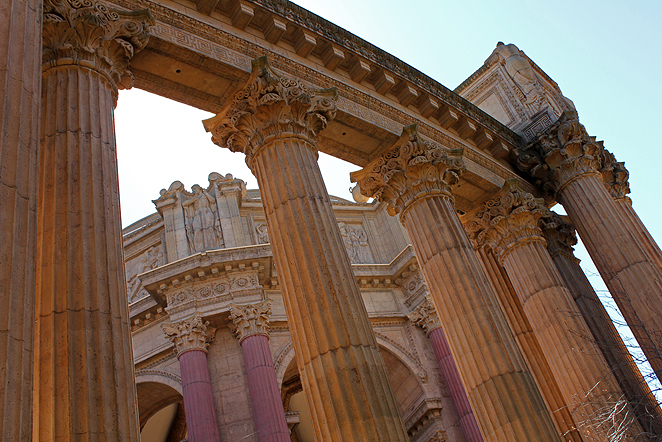 From: £22.00
Photographic Print. Columns at Palace of Fine Arts on Bay Street at Lyon, Marina neighbourhood, San Francisco.
This Palace was designed by Bernard Maybeck, a 50 year old known for his innovative designs. He took inspiration from Roman and Greek architecture; a colonnade, Corinthian columns and a rotunda resembling an epic stage set formed a fictional ruin amongst trees, reflected in a lagoon. It was originally built as one of 11 palaces in the Panama - Pacific Exposition of 1915, celebrating the opening of the Panama Canal. It was so important to San Francisco to hold the world fair, to celebrate a "phoenix like" rise from the ashes of the 1906 earthquake and fire. For 9 months, in temporary structures of wood and plaster, 21 countries and 48 US states showcased art, sculpture, transportation and machinery. The arts palace housed work of living artists, especially the Impressionists. At the end, a few were transported, the majority demolished but this Palace was so loved that it was saved by the Palace Preservation League founded by Pheobe Hearst. However by the 1950s, due to the nondurable materials and vandalism, the fictional ruin was actually a crumbling ruin, as seen as they walk by in "Vertigo". Before Maybeck's death, aged 95 in 1957, there was a concerted effort to save the Palace and in 1965 it was rebuilt permanently as a treasured sight.
To see more of these places and learn more, you can download my Cool and Retro Guide to San Francisco which is illustrated with my photographs.
Colours are as accurate as possible but may differ slightly due to screen calibrations.
Shipping outside UK mainland is estimated, on occasion a variation will be emailed before dispatch.
Images printed at a Fuji approved professional laboratory on highest quality archive papers, Fuji Crystal or DP 2.
A Signed Certificate of Authenticity Card states the series number.