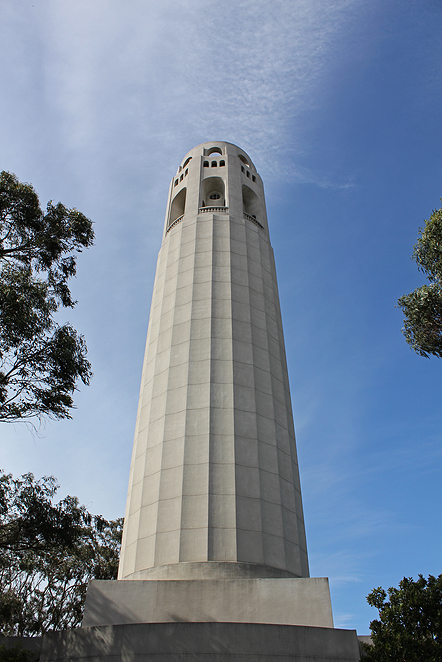 From: £22.00
Photographic Print. Coit Tower at 1 Telegraph Hill at Filbert Street, Telegraph Hill neighbourhood, San Francisco.
Lillie Hitchcock Coit bequeathed $118,000 to San Francisco for "the purpose of adding beauty to the city which I have always loved". The Tower was built in 1933 and has amazing 360 degree views from around the base standing on the low wall or from the top. She was 7 when she came to SF in 1851 and was saved from a tragic fire by the volunteers of the Knickerbocker Engine Company No.5. When she was 15, seeing firemen struggling up Telegraph Hill, she dropped her school bags and joined them pulling it up by rope and became the Knickerbocker No.5 mascot and rarely missed a blaze. She was made an honorary member in 1863, wore her gold badge and was regarded as patron saint of firefighters in the city. She lived a flamboyant life; she smoked cigars, often dressed as a man to gamble in North Beach Saloons and married Howard Coit against her family's wishes. They divorced in 1875. When an envious relative tried to shoot her and a friend rushed to protect her but was killed, Lillie fled to Paris where she became a favourite of the court of Napoleon III. In 1923 she returned to San Francisco where she died in 1929 aged 88.
To see more of these places and learn more, you can download my Cool and Retro Guide to San Francisco which is illustrated with my photographs.
Colours are as accurate as possible but may differ slightly due to screen calibrations.
Shipping outside UK mainland is estimated, on occasion a variation will be emailed before dispatch.
Images printed at a Fuji approved professional laboratory on highest quality archive papers, Fuji Crystal or DP 2.
A Signed Certificate of Authenticity Card states the series number.