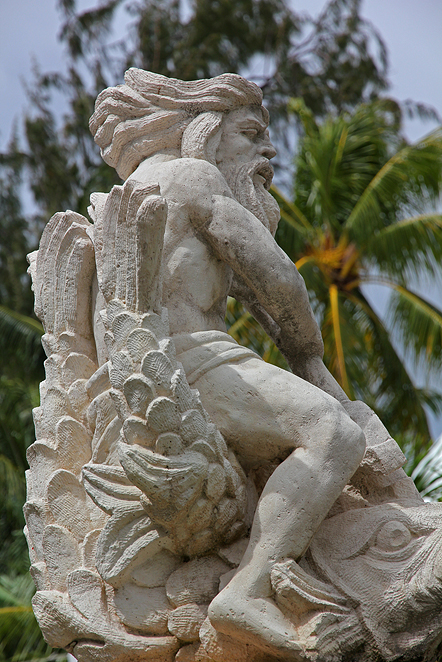 From: £22.00
Photographic Print. Stone statue of Neptune God riding a fish in Lily pond in Holetown, Barbados, Caribbean.
Neptune was the god of freshwater and the sea in Roman religion, influenced by Greek mythology; he is the counterpart of the Greek god Poseidon. Neptune was the brother of Jupiter and Pluto, the 3 brothers presided over the world, Zeus received the earth and sky, Hades the underworld and Poseidon the sea. Neptune had many children including Atlas, Orion, Pegasus and Triton the merman. I am not entirely sure if this statue is the god Neptune or Poseidon and if they are Dolphins or other fish. In art, Poseidon's chariot was pulled by a hippocampus or seahorses and he was associated with dolphins and three-pronged fish spears called tridents. He lived in a mythological palace on the ocean floor, made of coral and gems.
Colours are as accurate as possible but may differ slightly due to screen calibrations.
Shipping outside UK mainland is estimated, on occasion a variation will be emailed before dispatch.
Images printed at a Fuji approved professional laboratory on highest quality archive papers, Fuji Crystal or DP 2.
A Signed Certificate of Authenticity Card states the series number.