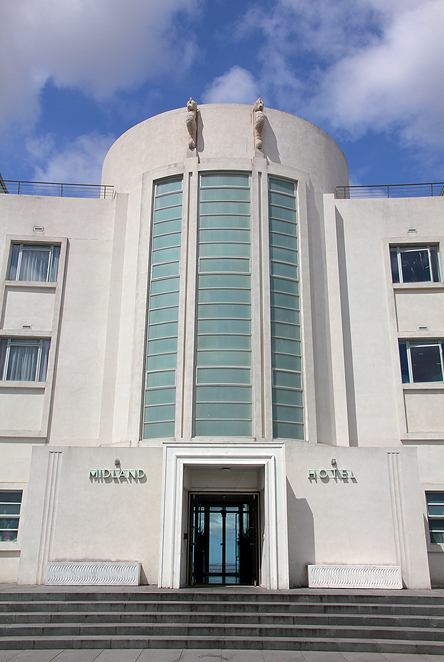 From: £22.00
Photographic Print. The façade of Art Deco Midland Hotel in Morecambe.
For the Streamline Moderne Midland Hotel, Oliver Hill commissioned the renowned sculptor and engraver Eric Gill toThe Midland Hotel is a grand building in the Streamline Moderne Style situated on the promenade, overlooking the sea and pebble beach at Morecambe but is more commonly referred to as the Art Deco Midland Hotel. Originally the North  Western Hotel was designed by Paley and Austin and built on this site in 1848 as part of a scheme by the 'Little' North Western Railway company to construct a railway linking the new port with Yorkshire. It later became the Midland Hotel in 1871 when the Midland Railway took over their railway company. In January 1932 plans were approved for a new hotel to replace the existing Victorian building would be replaced. The owners of the hotel saw Morecambe as an opportunity to make a new departure from traditional hotel design and selected the architect Oliver Hill to provide "a building of international quality in the modern style". Work commenced in August 1932, the new building rose from the lawn in front of the old hotel before it was demolished. Oliver Hill wanted to express his vision of unity in architecture and decoration, believing the exterior and interior should be linked and said, "you have here a unique opportunity of building the first really modern hotel in the country." He oversaw every detail and had a reputation for extravagant interiors using such materials as glass, chromium, vitrolite, marble and exotic woods. The new hotel opened on July 12th 1933 to widespread critical acclaim. 'Architecture Illustrated' devoted an entire issue to the Midland. Sir Josiah Stamp, President of LMS Railway company, said he had recently seen the most up-to-date hotel accommodation in Chicago, Copenhagen and Stockholm, embodying the latest modernism and cubism but the Midland Hotel eclipsed them all. In the 1980s the hotel was used as a location in the filming of episodes of the TV Agatha Christie Poirot, including the 'Double Sin' episode.
Colours are as accurate as possible but may differ slightly due to screen calibrations.
Shipping outside UK mainland is estimated, on occasion a variation will be emailed before dispatch.
Images printed at a Fuji approved professional laboratory on highest quality archive papers, Fuji Crystal or DP 2.
A Signed Certificate of Authenticity Card states the series number.