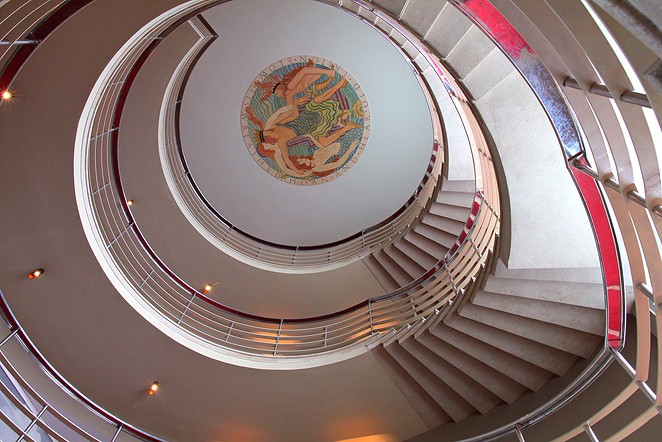 From: £22.00
Photographic Print. Spiralling staircase and mural in the Art Deco Midland Hotel. Morecambe.
For the Streamline Moderne Midland Hotel, Oliver Hill commissioned the renowned sculptor and engraver Eric Gill to carve two seahorses in Portland stone for the exterior of the building above the entrance. Inside the building, on the ceiling above a spellbinding staircase, Gill designed and carved a circular medallion which was painted by Denis Tegetmeier, a book illustrator who was Gill's son-in-law. It shows a sea god Triton in waves, embraced with 2 mermaids and a merman and is edged with the words "And hear old Triton blow his wreathed horn". In the entrance lounge, behind the reception desk, there is a huge bas-relief entitled "Odysseus welcomed from the sea by Nausicaa". It was carved by Eric Gill in situ from 6 tonnes of Portland stone at a size of 10 5 (3.175 metres) x 16 (4.877 metres) with lettering by Laurie Crib. The panel depicts a naked Odysseus stepping from the waves being greeted by Nausicaa and 3 handmaidens bearing fruit, drink and a garment, symbolising the hospitality being offered to guests by the hotel. It is based on 3 episodes of a story in Homer's Odyssey and has the inscription, "There is good hope that thou mayest see thy friends", and "Homer/Ody" in smaller capitals. This is repeated in Greek with "Eric G" added. Gill's original design for the relief was called "High Jinks in Paradise" but the LMS asked him to submit a less explicit design as the cavorting naked youths and maidens were too risque.
Colours are as accurate as possible but may differ slightly due to screen calibrations.
Shipping outside UK mainland is estimated, on occasion a variation will be emailed before dispatch.
Images printed at a Fuji approved professional laboratory on highest quality archive papers, Fuji Crystal or DP 2.
A Signed Certificate of Authenticity Card states the series number.