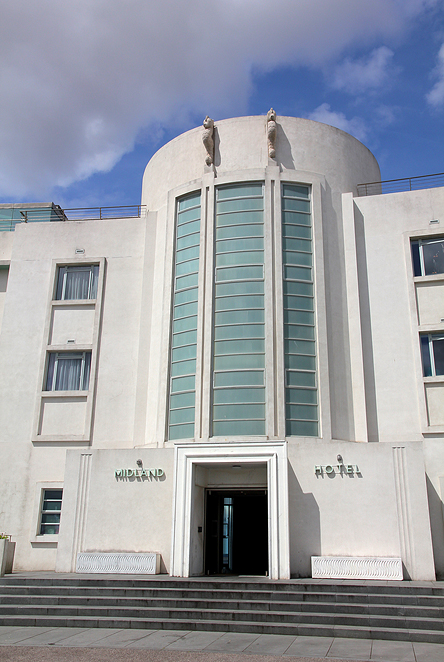 From: £22.00
Photographic Print. The façade of the Art Deco Hotel in Morecambe.
The iconic Midland Hotel was designed by Oliver Hill and built in 1932-33 by the London Midland and Scottish Railway. It included works by Gill, Marion Dorn and Eric Ravilious and was a favourite haunt of celebrities such as Coco Chanel, Sir Laurence Olivier Noel Coward and many of the actors and musicians performing at The Winter Gardens. For a wall in the South Room, Eric Gill designed and carved an incised relief map on a polished, natural ivory coloured 'Marplax' surface on a plaster ground which was painted by Denis Tegetmeier in oil paints. Measuring 8 6 (2.5904 metres) x 17 2 (5.69 metres) the map shows the northwest coastline from Whitehaven in the north to Birkenhead in the south, featuring the Midland Hotel, the Adelphi Hotel and 2 cathedrals in Liverpool, the Royal Scot train, Blackpool Tower, Furness Abbey, Lancaster Castle, shipyard cranes of Barrow and coal mines of Whitehaven. The Lake District is depicted as an idyllic region with hounds chasing a fox near Haweswater and leafy trees, blue lakes and fells. This is named the Eric Gill suite.
Colours are as accurate as possible but may differ slightly due to screen calibrations.
Shipping outside UK mainland is estimated, on occasion a variation will be emailed before dispatch.
Images printed at a Fuji approved professional laboratory on highest quality archive papers, Fuji Crystal or DP 2.
A Signed Certificate of Authenticity Card states the series number.